Marvel Studios’ Eternals, now playing in theaters, brings 10 new Super Heroes into the Marvel Cinematic Universe (MCU). Based on Marvel Comics characters created by Disney Legend Jack Kirby, the Eternals are a group of ancient, immortal beings sent to Earth thousands of years ago to protect mankind from the Deviants, a race of alien predators. Directed by Oscar® winner Chloé Zhao, the film stars Gemma Chan as Sersi, Richard Madden as Ikaris, Kumail Nanjiani as Kingo, Lia McHugh as Sprite, Brian Tyree Henry as Phastos, Lauren Ridloff as Makkari, Barry Keoghan as Druig and Don Lee as Gilgamesh, with Kit Harington as Dane Whitman, Salma Hayek as Ajak and Angelina Jolie as Thena.

In introducing the 10 Eternals (in addition to Dane), filmmakers wanted them to have a distinct look—both within the larger MCU and within their own ranks. The initial concepts for their Super Hero looks came from Ryan Meinerding, Marvel Studios’ Head of Visual Development, and his discussions with Zhao and costume designer Sammy Sheldon Differ.

“Kirby is always a great reference point for us, because he did things that were always so distinctive,” Meinerding says. “Kirby was one of the best designers out there, because he could really come up with some interesting and unique visuals for each character that he worked on; the Eternals fall into that category very clearly. He used a lot of circles and bold shapes, and he used a lot of very iconic, strong, bold language to define the Eternals.”

“A lot of our early explorations were about trying to translate that more directly,” he recalls. “Then, we started asking other questions like, ‘What materials would their costumes be made of if they’re not of Earth? How can we make them feel otherworldly? How can we tie that stuff into what Kirby was doing, but also create something that feels unique to this project?’” Meinerding credits visual development concept illustrator Wesley Burt with coming up with the idea to reference astral planes—which, like the Eternals of the comics, use “circles within circles within circles to create interesting graphic patterns.”

From there, Meinerding says, they drew inspiration from the Celestials, aka the architects of life itself, who sent the Eternals to Earth. They have the appearance of “metallized meteor rock,” so it seemed natural to incorporate that element into “the surfacing of the majority of the Eternals’ costumes,” Meinerding says. “They look like they’re sort of metal, but still conform to the body. Those three things tied together to basically create the look.” 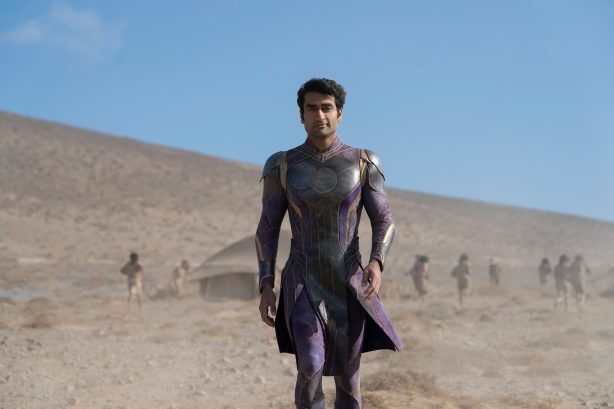 Zhao and the producers felt it was important that the Super Hero suits did not look like uniforms. Instead, they should be cool and timeless, with modern elements. There should also be a unified design element to reinforce that they came from the same universe, with differing color palettes inspired by the cosmos and the night sky to maintain individuality. As such, the color palette created by Kirby for the Eternals in the comics books inspired the Super Hero suits that ultimately appear onscreen. “Chloé was very interested in creating a look that didn’t turn them into a rainbow palette of color,” Meinerding says. “In the comics, the costumes are iconic, but the colors are saturated; it could look a little silly onscreen.” Zhao also wanted the costumes to distinguish two groups among the Eternals: thinkers and fighters. “Chloé was a lot of fun to work for,” he says. “She brought a sensibility to this project that was really focused on making all the costumes look grounded, real and solid.”

The concepts and ideas generated during those first few months provided the springboard for Sheldon Differ to take back to the costume workshops at Pinewood Studios London. There, she worked with her friend, Ivo Coveney, costume FX supervisor, to bring all the designs to life.  “Ultimately, Chloé wanted to celebrate the idea that these people are not human, and not a Super Hero in the traditional sense,” Sheldon Differ says. “She wanted something very soft and very body conscious that celebrated each character individually.” 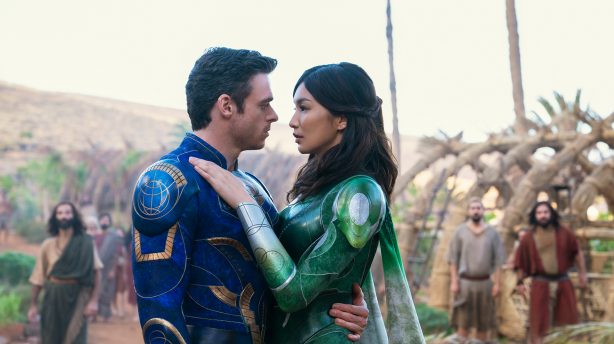 When Sheldon Differ first joined the film, she and Meinerding had “lots of conversations” about how to practically produce these ideas. For example, Zhao wanted the costumes to have a shared language through symbology and insignias, in addition to incorporating the cuneiform language embedded in the design of the bridge in the Domo, the Eternals’ ship. “The language was not an A, B, C,” Sheldon Differ says. “They represented ‘water,’ ‘God,’ ‘heaven’ and ‘love’—those kinds of things. Each symbol represents something elemental.”

Sheldon Differ and her team researched the cosmos, nature, minerals, nebulas and rocks, which led to an ancient, galactic look and Super Hero suits that gave the impression they originated from organic matter. It was decided that the costumes, as much as possible, should be a single surface, linear and fit like second skin, rather than armor-clad uniforms.

“After Ryan’s concepts came to us, then we had to decide what the actual fabrics and textures would be,” recalls Sheldon Differ. “We came up with this crazy method. In order to make a pattern that didn’t exist, we had to create it organically. We got big boards and did massive oil paintings that were inspired by the universe. For example, we’d looked at the Milky Way and did tons of research into dying stars.” Print artists created multiple paintings per character, all within their respective color palette. Then, for each costume, digital printing took place with experimentation on the surface of fabrics and urethane to achieve a 3D effect within the fabric while still keeping the stretch. Suffice to say, it was a detailed process. “We had to make a blueprint so we could replicate the fabrication and hardware,” Sheldon Differ says. “We made about 10 of each costume; that’s 100 costumes!” Sheldon Differ estimates the first costumes took around five months to develop and make. Once the costumes were finalized, the repeats took between two and three weeks to make.

Eternals spans thousands of years, and Sheldon Differ’s team was also responsible for creating the Eternals’ civilian attire. Whether the scene was set during the Gupta Empire in 400 AD or in present-day London, the costumes had to reflect each character’s personality. “It was very calculated,” she says. “One of the things we all discussed was that these characters needed to have their own identities. Even though they’re sort of built from the mold, they all have their own powers and interests. We referred to their Super Hero looks, then we considered their own journeys. We always kept an element of their primary color, even if it was a tiny touch. For example, today Ajak wears denim with beige and brown, because her colors were blue and gold. We tried to pull their colors across each century.”

“In terms of costuming the whole film, for each epoch that we went through, we tried really hard to talk to anthropologists about what the truth is behind every single period,” she adds. “Funnily enough, these periods are turning points for humankind, but in doing our research, there is very little knowledge about what the realities were. We really did talk with anthropologists to get it right and to not make a hokey version of those periods.”

Fortunately for future anthropologists, as Eternals help to usher in a new phase of the MCU, everything is onscreen, recorded for eternity. “This was a super fun movie to work on,” says Meinerding. “It’s exciting to come up with a whole new set of characters that we’re hoping redefine the notion of what it means to be a Super Hero. Reframing the MCU is so much fun to be a part of, and the idea of doing a such a big film with so many characters, and with a compelling set-up and interesting visuals, is so great to be a part of.”